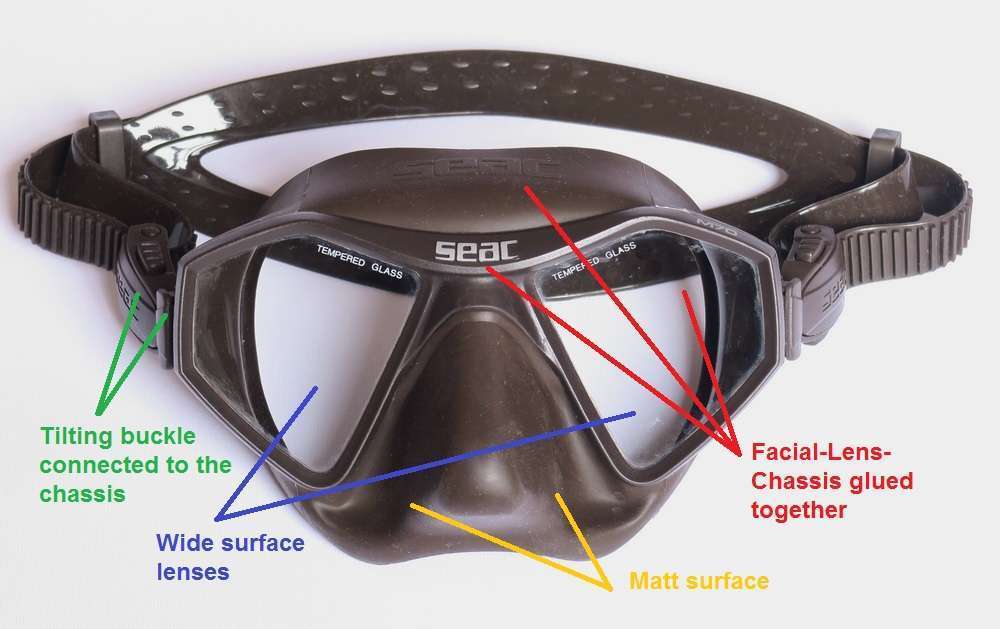 Second mask tested by AP in the X-Ray column is the M70 by Seac.

Already presented in the article on the entire 2016 product range (many) designed by Seac for spearfishing, the M70 is, just like Salvimar Noah, the top of the line mask by Seac.

The main characteristic of the new mask by Seac, already launched in 2015 in black colour (L70), is the construction system with integrated chassis-lens-facial glued together structure (semi-frameless technology), instead of the dismountable one. This solution determines two very important effects: great reduction of the internal volume of the mask and strong improvement of visibility, thanks to the possibility of positioning the lens closer to the face. Difference compared to the standard solution is about 5 mm, given by the reduced thickness of the chassis. In addition, the glued solution reduces the rubber that would generally cover the lens all along their perimeter of about 1 mm; an additional advantage to optimize visibility.

The M70, available in the green and brown versions, is designed with very wide and well shaped lenses, to offer best visibility in the key areas for the spearo and the freediver. The silicone of the facial is a little hard compared to other products on the market, partially reducing comfort feeling on the face. Still, the choice has been made by Seac to limit squeezing of the mask at high depths and increase durability, avoiding the risk of the facial loosing its original shape after many times of use. Still looking at the facial, this is made with the traditional double sealing lip along the entire internal profile. The space for the nose is relatively big, but becomes narrower at the top. Exterior design is attractive, with the chassis completely visible frontally, as it is not internal to the silicone, but glued on it, and perfectly integrated to the facial and lens. We must underline how the gluing of the M70 seems to be impeccable and extremely resistant. We will verify in a duration test if such initial sensation will be confirmed.

The silicone of the facial is matt externally, with an anti-reflex effect, reflex that could scare fishes or simply indicate to them our position underwater. A pity the absence of a matt surface also externally, solution that would considerably  reduce possible reflexes of sun rays on the internal part of the facial and towards the eyes of the spearo or freediver, which a consequent glaring effect.

Lens are of 3 mm tempered glass, a standard value, below which it is inadvisable to go. Seac anyway does quality testing on the lenses, to guarantee maximum strength of such components and consequent safety for the user. This is done through a special machine that lets a steel ball fall from a certain height on the mask lens. Of course, test is passed only if the lens does not break at all.

The buckles of the rear band have a tilting system, very functional, with quite a complex structure compared to other solutions on the market. The connection seems to be extremely strong with great pull directly on the area of the chassis. A solution, the latter, that optimizes the adherence of the mask to the face. Referring to the connection “rear band-facial-chassis”, the harder silicon used on the M70 can offer some advantages in terms of stability of the mask on the face and reduction of the squeezing effect at deep depths.

To see the best price on-line of the Seac M70 found by AP click here.

Test in the sea

Wearing the M70, the first sensation is of a very stable facial with very good water tight effect, confirmed also during the test. The silicone used, with a quite high shore value (meaning hardness) influences comfort, which feels a little reduced. This is confirmed, after 4 hours of use, by quite visible signs on the face. Still, squeezing effect of the water pressure on the facial at – 20 meters is indeed very limited thanks to such silicone.

Closeness of the lens to the eyes is extreme, and, thanks also to the wide and shaped lenses, determines an optimal field of view, where the chassis profile and the rubber of the facial are almost irrelevant on the field of view. The only minor point of limitation of the view is at the top centrally.

Another effect of the lens being so close to the face and eyes is the strong reduction of the internal volume, with a consequent reduced necessity to equalize the mask. A pity such design determines, in our test, a slight contact of the eyelashes to the lens, when eyes are closed and opened. An aspect, this one, that reduces partially visual comfort. Since every face has its own shape, it will be important to test well the M70 on the face when choosing your mask: the potential of the Seac mask is very high, but can be limited by this aspect.

The mouthpiece, also available in the camouflage version Kama, has a wide tube section, that helps smooth breathing, but also increases the dead volume of already breathed air that stagnates in the tube (which is proportional with the increase of diameter and length of such part). The material used is particularly hard, a solution that avoids any possible squeezing of the tube, but after some time it is also quite uncomfortable on the head, and requires re-positioning as such part generates slight aching on the skull. Moreover, the shape and rigidity of the tube do not permit a comfortable positioning of the latter inside the rear band, behind the head. Such solution is generally interesting and useful, as it avoids noisy and uncomfortable vibrations, counterproductive especially during descent phase.

After the first test of measurement of the internal volume of the Salvimar Noah, AP has proceeded in the same way with the Seac M70, utilizing the same dummy, the siringe filled with water and identical measuring system. Once again it must be pointed out how results obtained refer to the dimensions of the polystyrene dummy head (masculine), and so they do not turn out as absolute values, but relative ones, and are important to understand the different quantity of air present internally between each model of mask. These differences are sufficiently reliable, but can vary slightly from one face to another.

At the end of the measurement, one complete 60 ml siringe had been emptied, while the second had still 21 ml of water inside when tre mask was full, with a final result of 99 ml for the Seac M70. Such value is very competitive, and positions the M70 immediately after the Salvimar Noah, that has obtained the extremely low value of only 94 ml. The extreme proximity of the lens to the face would actually permit even a lower value for the M70, but there is an unused volume on the forehead that increases of some ml final result. We will publish in the next weeks internal volumes of other interesting masks on the market, to be able to obtain a real classification among the main competitors…stay tuned!

Another key test for masks is the measure of the field of view, an aspect that is very much looked after in masks for spearfishing with the glued facial-lens-chassis solution. Utilizing the same identical measuring system applied for the measurement of the field of view of the Noah, AP has proceeded in the photographic detection for the M70.

So once more a second polystyrene dummy has been used, inserting a GO-PRO inside it, positioning the dummy respect to the target in the identical way as for the Noah. Final results have been impressive.

The sensations had during the test in the sea have been confirmed, where the only minor blind zone, but we are talking about an extremely limited area, is the central top one. This effect is not much due to the internal edge of the chassis, but the external one, centrally between the two lens. In such area thickness of the chassis is considerable, both to strengthen the most stressed part, and also to be able, exactly between the lenses, to advance the chassis and avoid the latter to touch the upper part of the nose when the mask is worn. Final visibility result of the M70 is anyway absolutely excellent, with the following values:

The Seac M70 is a top value mask, with very high level characteristics, and a few weak points. Great aspects are first class visibility, optimal reduced internal volume, and an (at least apparently) impeccable gluing of the facial-lens-chassis system. To be improved the hardness of the silicone of the facial, resistant and un-squeezable, but to be sincere a little bit too tough on the face. Also an important limitation comes, for some faces, from the eyelashes touching the lens when opening and closing the eyes. Finally, a too hard mouthpiece tube reduces somehow the comfort. The table of votes synthesizes what just described