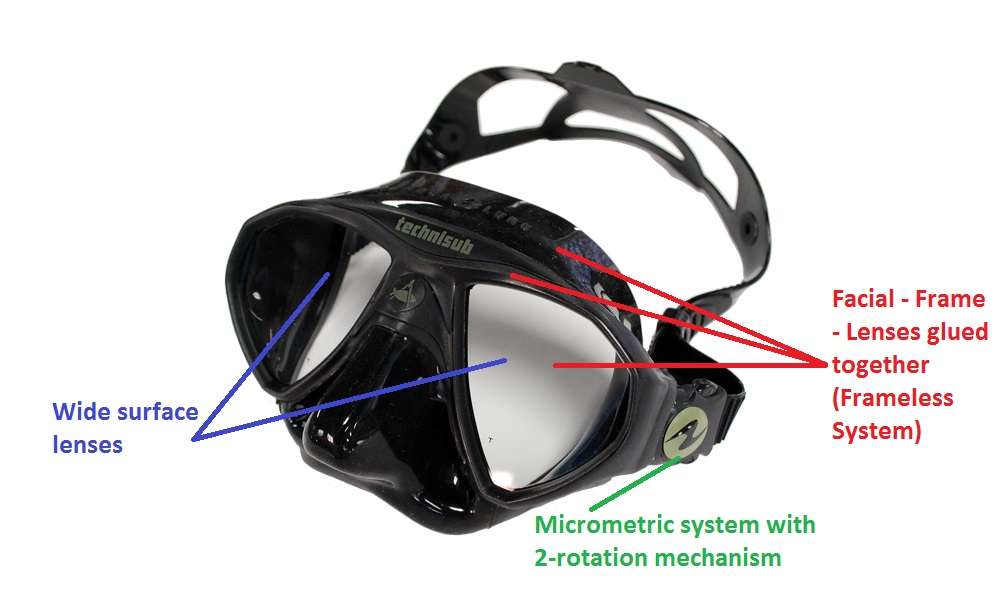 Technisub-Aqua Lung Micromask has been the first among the masks of its type, at least between the ones tested by AP. With its “Frameless” design, it has been, until today, the most imitated and loved mask Worldwide. Let us see if the Micromask still deserves such title!

The Micromask is the first mask among the ones tested by AP to have been designed with the “Frameless” system, studied to make the mask compact, and especially to bring the lenses close to the eyes, obtaining greater field of view and reduced internal volume.

The lenses have an upside down drop shape and, even though they have a very wide area for maximum field of view, the Micromask has a very compact design, in addition to an extremely high quality construction. The mask appears very similar to the Seac M70, or we should say viceversa, since the Micromask was “born” earlier. The chassis, which is glued to lens and facial, has a good height-thickness also in the area between the lenses, as to maintain good strength and resistance to flexion.

The rear belt is traditional, but the connecting system, which goes directly to the chassis, is very interesting, with the “Cardanic Joint” system, very well designed, that permits rotation in two different axis, up and down and internally and externally, giving the possibility of a very precise, but stable, adjustment. The two opposed regulation buttons are very comfortable and easy to act on for best regulation.

We remind you that with this kind of “Frameless” mask the prescription lenses can be mounted, but only gluing them on the original lenses with a specific system, which is more expensive than the traditional system, that consists in substituting the original lenses with graduated ones. Such solution is though only possible with external dismountable frame.

To see the best on-line price of the Aqualung Micromask found by AP click here.

Test in the water

The compactness and the comfort of the facial of the Micromask on the face are of top level. Unfortunately, the mask also shows immediately an important limit in our test: the eyelashes very slightly touch the lenses. This aspect is common, and has already been pointed out in the test, to the Seac M70. The Micromask will so have to be tried well on our face in the shop, to understand if such issue is present wearing the mask on our face. The silicone of the facial of the Micromask is softer than the one of the M70. The latter is for such reason less comfortable on one side, but deforms less, especially in deep dives where the mask is squeezed more on the face This aspect on the M70 limits partially the problem of the eyelashes touching the lenses, while on the Micromask it could increase in deep dives.

The fogging on the new lenses is present, even though not too much, demonstrating that during construction phase a little quantity of liquid silicone is deposited on their internal surface. It is anyway sufficient to use a lighter or some slightly abrasive paste, such as toothpaste, and the problem is once and for all solved. It is simply important to remember to do this before we wear the mask for the first time.

During the test in the water, the field of view seems to be extremely ample, among the best between the tested masks, and without any minimal blind spot. Also, the internal volume seems to be very low, both for the compactness of the mask and the very limited need to equalize it.

Once more we have proceeded, as for the other masks tested, in the measure of internal volume, using a standard dummy head and a 60 ml siringe. The test has been done tightening well the rear belt of the mask, but not exaggerating too much, just as for the Seac M70, as the contact between eyelashes and lenses does not permit this. With three different measures made, the average value of the internal volume has been equal to 96 ml (equivalent to 96 cc), an excellent value, that positions the Micromask just behind the best in this field, the Salvimar Noah. In such measurement we must though underline that a margin of +- 2 ml should be considered.

Also for the Technisub-Aqua Lung Micromask we have proceeded with the scientifical measure of the field of view. The methodology has been the same as in previous tests, utilizing a GOPRO camera to shoot photos, positioning it in a space made inside a dummy, so that the lens was in the same position of the left eye. From the photo obtained the field of view has been measured in the 4 cardinal directions and the 4 intermediate directions.

The final result is absolutely positive, due also to a great field of view towards the bottom, thanks to the shape of the lenses. The numeric results obtained are:

The Micromask was the point of reference for the top of the line masks, especially the ones for spearfishing. Today, the product by Technisub, part of Aqua Lung Group, is still one of the best designed and more effective masks on aspects such as field of view and internal volume. A pity the lenses that can, on certain faces, very slightly touch the eyelashes. In such case the comfort will be reduced, else the Micromask is an excellent choice. The marks table synthesizes the general results.

X rays to Cressi Nano: the best of dismountable masks