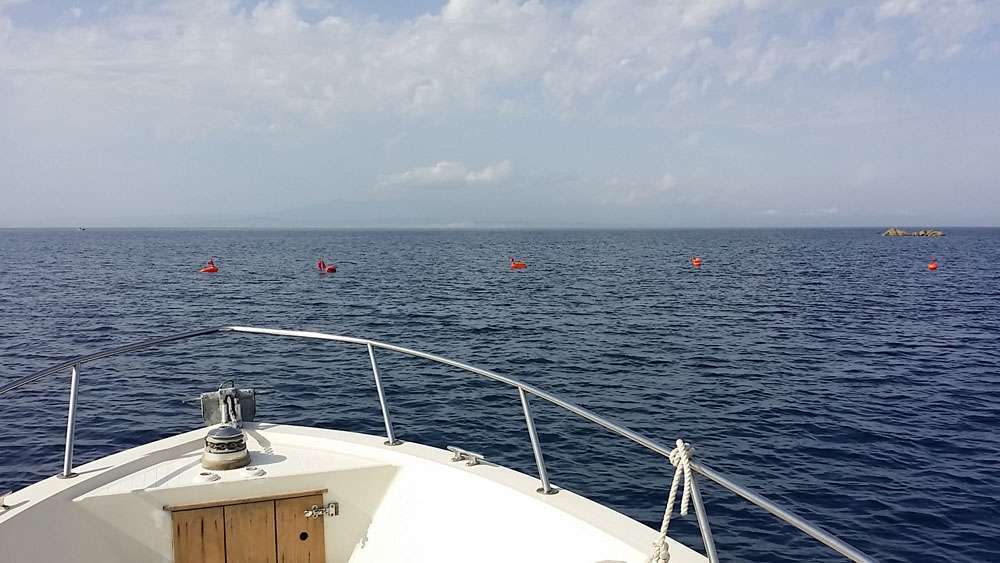 After the First Impressions on a good number of different kinds of buoys, AP has testd them deeply, to understand the strenghts and weaknesses, first of all the visibility aspect.

It is indeed true that unfortunately in the sea there are people who do not know even the basic rules of marine behaviour and safety, such as the absolute prohebition to pass closer than 100 meters from a buoy indicating a diver, or any boat with red flag with a white diagonal line, that indicates presence of divers below. It is also true, though, that often buoys are not well visible due to rough sea or reflexs of the sun.

So the motto from AP is, “Buoy close to us, big and well visible, and ears open, always!”.

AP ha utilized for the Super Test a torpedo buoy, and a double buoy, both in PVC, produced by Salvimar.

In addition, a spherical “Sphere” and a dinghy shaped “Apnea” buoy, also in PVC, and a spherical one covered with texture, the “Tech Sphere”, from Mares.

Even though the different shapes and possible solutions, it is dimensions to give the greater effect on visibility. AP has measured all the buoys taken into account. The total height of the Tech Sphere has non been evaluated since the dismountable flag can be positioned at different heights. Moreover, the conencting system between flag mount and buoy, don ewith elastic bands, does not convince us much, and seems to be a little loose.

Visibility in the sea

AP has shot videos of the approach a the boat from two different directions to the buoys, with the aim of evaluating the visibility of the buoys positioned sideways or frontally, just as it can happen depending generally, depending on the boat direction versus wind direction.

Buoys with cilindrical simmetry, (Sphere, Tech Sphere and Double Buoy) vary little their visibility as the direction of the wind respect to the boat changes, as the only thing that will make the ifference will be the flag positioned sideways or frontally. The torpedo buoy, which good dimensions, is surely the most visible if positioned sideway (with the profile showing). Still based on a matter of dimensions, the Tech Sphere is also very visible, also due to the generous dimensions of the flag. Very good visibility also for the Apnea, thanks to the elongated shape and relatively good dimensions. Limited dimensions reduce visibility of the Double Buoy, which though has a higher body than the Sphere, which is the least visible.

In this case a lot of visibility is lost by the long and narrow shapes, in particular the torpedo buoy, and the not inflatable flags. The torpedo, both for the body shape and the flag type, passes from being the most visible, to the least. The Double Buoy, thanks to the high height of the body, maintains good visibility, just as the Tech Sphere, also with good height and width. The Apnea follows, that, although it has a reduced height of the main body, is still quite visible thanks to the inflatable flag, which is quite visible also in edgeways. Finally the Sphere, that, even though it has an inflatable flag, has a far too small central body.

Drag due to wind and waves

If visibility is the first aspect to look to, why is it that companies do not produce extremely big buoys? It is evident that drag generated by wind and waves is a limit to this. The greater the dimensions of the section of the buoy positioned orthogonally to the direction of the wind, and the stronger will be the force that will pull the buoy away from the diver, when the latter will try to move against wind direction. Similarly, the wider will be the section of the buoy in contact with water surface, orthogonally to waves direction, and the greater will be the pull generated by the waves in the direction of their movement. Finally, the greater the surface of the buoy in contact with the water, and the higher the friction between the buoy and the water surface. Analysing the shape of the different buoys, the torpedo buoy is particularly aerodinamic and hydrodynamic, followed by the Apnea, which has though a loto of surface in contact with the water, and 5 rope passages, of which 4 positioned orthogonally to the buoy longitudinal direction, that will no dought generate friction.

The Tech Sphere, due to the great wide dimensions, and the Double Buoy due to the height, will be dragged more by wind and waves. Good penetration of tre Sphere due to its small dimensions.

Clearly more weight we have to drag and the more effort we will make, event hough final effect is a lot lower than wind and waves. AP has weighed each buoy of the test and has created a chart. Of course the wadditional weights needed to balance the buiy will also be important. The only buoy to maintain a perfect streight position without weights is the Apnea, while, with calm sea and weak wind, also the Sphere and the Double Buoy maintain the correct position, even though, especially the Double Buoy, if dragged tends to fall on one side. This means it is necessary to add weights, even if fewer, also to there buoys. The torpedo buoy and the Tech Sphere aboslutely need good weights as they automattically fall on one side if not balanced. The Tech Sphere, in particular, has a higher weight and a high center of gravity, given by the big and high dismountable flag. For this buoy the additional weight will have to be doubled.

Each buoy has its specific characteristics, and particular shapes and solutions offer good advantages.

The Apnea, in addition to having a natural balancing that need no additional weights, offers a comfortable space where to position objects, for example the extremely important water bottle to rehydrate. A similar solution is available with the Double Buoy by Salvimar, that has a central hole where a 33 cl. bottle enters perfectly. In addition, the Double Buoy has the great advantage of permitting the winding of the line between the two inflated rings that constitute the body of the buoy. The line can also be blocked with the plastic carabine positioned underneath the buoy, regulating perfectly the length of the free line. Finally, the Tech Sphere by Mares has certainly the advantage of a texture cover, which is more resistant against rocks and to puncture, even though it is difficult to inflate due to the unprecise position of the valve versus the hole in the texture.

The final votes consider as first parameter visibility, meaning safety, which is valued double in the final calculation. Weight (including additional balancing weights), to the contrary, since it is very limited and influences only slightly resistance to drag if compared to wind and waves, is calculated as half in the final sum. Finally, the intelligent solutions are valued. Price lists (meaning with no discount applied), are in the chart, but do not give points. AP leaves to the reader the evaluation of this aspect, based on the technical characteristics and material of the different buoys.

To be always updated on the new Super Tests clickLike on the Facebook page of AP. facebook.